According to the Australian Bureau of Statistics the population clock for the entire country reads 22,726,327 at this very moment.  The New York Metropolitan area, defined by the U.S. Office of Management and Budget as the New York-Northern New Jersey-Long Island, New York-New Jersey Pennsylvania Metropolitan Statistical Area (MSA), had a population of 18,897,109 as of the 2010 census (roughly 1 in 16 Americans). Put that into perspective. The entire population of Australia is just slightly larger than the entire Metro New York area. So that explains things.

I won a contest the other day. After discovering my odds of winning something are somewhat in my favor in comparison to the competitiveness that I’m used to (roughly 1 in 16 Americans) I gave it a go. Australia did something awesome. It just unveiled a new radio station called Triple J Unearthed. Basically, this station is dedicated purely to playing music from unsigned Australian artists. Awesome. So when I stumbled across a contest to win tickets to the launch party and a free tee and cd of course I thought what the heck. And I won! Here’s what I had to do: just email ABC2, the television station, explaining what my favorite show was and why! Well that’s a no brainer, TwentySomething! Here’s what I wrote:

My favorite ABC2 show is TwentySomething! What’s not to love! As a TwentySomething new to Brisbane, I find myself in constant misadventures all around this city almost as if I’m reliving my glory days when in fact I work full time and am on the later age of the TwentySomething spectrum. My friends think I’m crazy for living this double-life, but isn’t that what living abroad is all about! My flat mate Sam and I are in a constant battle of who is Jess and who is Josh in the relationship; it’s a hard toss up, especially when I asked in a joking manner when I can start exposing him like Josh during the erotic cleaning episode, and he responded “I’ve been waiting for you to ask me that all day!” I
turn to Jess and Josh each week for new ideas, and can’t wait to see what’s up
their sleeve next!

Thought that was cheesy enough to catch their interest, and apparently it was. I also like it when I go somewhere and someone comments on how darn crowded it is. I do at times mutter to myself, “walk into a bar in the middle of Manhattan on a Saturday and perhaps your perception of ‘crowded’ will change”. However, it’s all relative I guess. 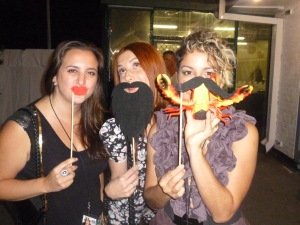 Halloween is approaching. Well, first Oktoberfest is approaching and I’ve got myself lined up for an all day stein sculling event tomorrow however my costume never made it across the seas. Boo. Alas, should be a fun day and makes me think back on Oktoberfest in Munich in 2006, oh the days. So yea, this would be the 6th year of Lisa and Emily’s Halloween Extravaganza in NYC but I’m in Brissy and Emily is in Buffalo and there is no extravaganza. There is no big Halloween, no trick or treaters, no pumpkin patches to pick pumpkins from, no carving of silhouettes and worst of all, no CANDY CORN! Ahhh. Well, at least I can repurpose the Oktoberfest costume I never got to wear so it won’t be a complete waste.

I rarely watch TV, and when I do its two shows, TwentySomething and Miranda (UK) and they are hilarious. Well, I also secretly download the Vampire Diaries but shhhh. Regardless of what my television amusement preferences may be, I did want to touch upon that at times I notice an exact script of a television commercial shown in the US, to the tee, only with Australian actors. Now, I’m fully aware of need to adapt marketing and advertising materials to a local culture, it’s just very fascinating when you get to witness it firsthand. I’m sure many of you, regardless of your national orientation, may have seen the yogurt commercial where the wife talks about all of the yummy things she ate that day like key lime pie and chocolate mousse etc and the husband is searching through the fridge trying to find all the of the “real” desserts when in actuality she is referring to yogurt. Oh boy, it’s a global phenomenon only with local desserts referenced!

No blog goes complete without a reference to the astronomical cost of living. For example, after a late night bender instead of stopping off at my usual Pie Face for a delicious meat pie that without a doubt regardless of my intentions ends up on my outfit, I chose to venture with my accomplice to New York Slice. Holy Mother, Oh My Gosh. $7. Yes, $7 for a slice of pizza! Now, granted it was 3 am, I still think that it may, and I need to do better research, be $7 around the clock. Yum, but no thanks. Secondly, after accidently going on a spree at Target yesterday, when asked if I would like the items I purchased in a bag I was kindly told that will cost me 10 cents. Now, I understand everyone is trying to encourage the population to be environmentally friendly, which I 100% agree with, I was just a little surprised when Target is the type of bulk buy place that it is. Let me just clarify, Target here is of the standards of a US Kmart, nothing to get excited about and in no way a Tar-jay (spoken in the condescending French way that I don’t know how to use special characters to spell out).

As an east coaster growing up going to “the shore”, and yes it happens to be in New Jersey however please let’s not go there, I kind of like that the same affinity here is referring to the beach as “the coast”. The only difference is clarifying if you mean the Sunny Coast (Sunshine Coast) or Gold Coast. I’m sure there is secret lingo to specify without actually specifying which I’ve yet to discover.

Two other points of observation. If I’m excited, and can’t wait until the time that I’m waiting for to come, or maybe even in other references too, I would refer to the nights until the encounter is to take place in terms of “sleeps”. “Only one more sleep until Oktoberfest!” Additionally, if I were to go somewhere where the weather is cold and snow appropriate I would describe that as “I’m going to the snow” or while in mountains “I’m in the snow.” And people just know, that means your skiing or something. I guess because snow is such a big deal and all.

So yea, in times of needing alertness or motivation to get pumped I turn to my flatmate Sam, and he plays for me the S Club 7 theme song. And everything is alright, S….Club!!

2 thoughts on “It’s A Small World After All”