Senior citizens in bright pink prom dresses and oversized sports coats stood at the front of Richmond Town Hall while singing Waltzing Matilda, Australia’s unofficial national anthem. Confused, and slightly drunk, I attempted to sing along amongst the 79 other people from 32 countries that would momentarily become, like I would too, an Australian citizen.

Arriving two weeks earlier from London, I sat outside at a pub in Windsor catching up with friends I hadn’t seen in nearly 6 months. At first they seemed unsure of what was so different about me. Was it my hair? Had I grown back into my city slicker ways?

I was pale. They had never seen me so pale! Two winters back to back and I showed up in sunny Australia the color of a ghost.

I was way more emotional coming back to Australia then I had expected. But then again I’m still confused why I didn’t anticipate I would be. Australia was my home for almost 5 years. That’s longer than college, and longer than my time in Hoboken.

It’s strange to come back to somewhere that was your home for so long, and everything is still the same. All of my favorite places; all my favorite people. But I think that’s what made the whole citizenship experience more special.

I went back to my old flat. I slept in my old bed with the same bed sheets, the same towel hanging in the shower, and my shoe rack in the closet. I even had left my summer wardrobe behind. It was like I lived there, but in reality I was in someone else’s bed, using someone’ else’s things that were once mine. The good news was it was at least my best friends’ and not some strangers!

I immediately stomped my old haunts. I sauntered down Bridge Road for avocado on toast at my local Gypsey & Mosquito and bumped into my former doctor. I had mac and cheese and burnt ends at Meat Mother with old coworkers after getting my nails done at my favorite budget salon Paradise Nails. I took Wes’s dachshund Frieda for walks along the Yarra River, she’s kind of my dog too, or at least I pretend she is.

I didn’t realize until I came back home how much I had missed it all. Waking up each morning to the bright sun, coercing me out of bed. Even spending time in Sydney, the place my love affair with Australia first started, made me ache to move back. There was familiarity of running along the coast from Bondi to Bronte, stopping to watch the surfers, and sipping drinks at swanky beach bars. 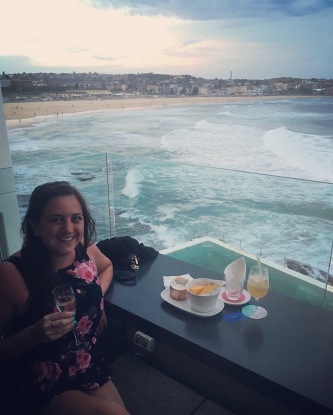 So as I sat in the back row in Richmond Town Hall waiting for my name to be called, of course it was in alphabetical order, I smiled to myself a bit. I approached the whole citizenship thing a bit casual at first, I paid my dues and lived in the country long enough, but when I finally entered into it I felt excited to be an Australian. 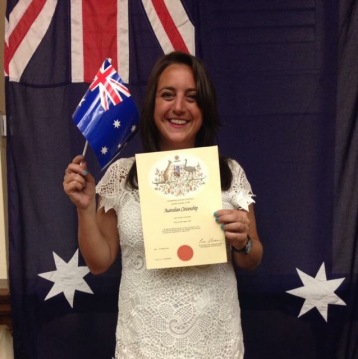 I waved my little Aussie flag high to greet my best friends Anne Marie and Nidya (who amazingly flew in from Brisbane for less than 24 hours to share the celebration). I looked over from time to time and smiled at the Asian guy to my right, who was so excited he kept jumping out of his seat. I was grateful as the mayor explained there is a reason why they have a banner hanging out front stating that asylum seekers are welcome, and felt proud to live in a place that provides refuge.

To sit amongst a group of people who were there for many different reasons, all with varying colors, languages and motivations, and to think about how I got to be in that same room, was one of the most rewarding things I had ever done. And afterwards as I sat with a plateful of dumplings and my bottle of wine with some of my closest friends, I felt damn proud to call Australia one of my many homes and to now call myself a tri-citizen.