If there’s one thing you must do in Porto it’s Taste Porto downtown food walking tour. One of the best ways to truly understand a city and the cultural drivers is through food. Food is cultural expression. 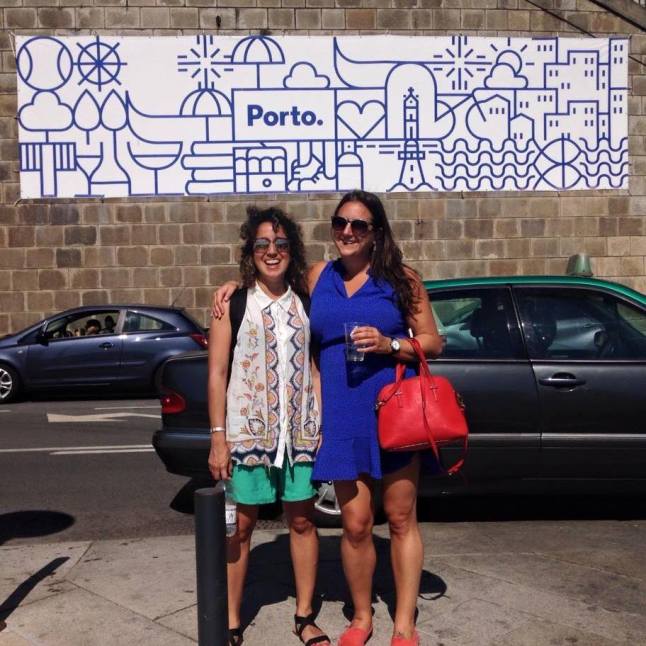 We met our guide André near Mercado do Bolhão in Porto’s city center. “I can promise you food, wine and caffeine,” he boasted, gearing us up for the next 3.5 hours of indulgence. We were guaranteed some of the best food in Porto, all from local producers. As many tourists would expect to have tripe (intestines) and port; André made sure we tried a few things off the beaten path.

André co-founded Taste Porto with his high school mate Miguel and his wife Carly. Although he trained at university as an engineer, his passion of Portuguese food is what brought this little tour together. Early on we were given a big thank you for our involvement, as a portion of our fee went to the AMI charity.

From our first stop trying the light, flaky pastries of Chaves, a small city in Northern Portugal, I knew it was going to be good. Only half of the normal sized portion, we tasted savory minced veal with parsley and a dark chocolate filling as our second. To be called such a pastry you must pass the designation of origin, similar to how Champagne can only be called when made in Champagne and Port similarly. Luckily the brother and sister owners of A loja dos Pasteis de Chaves been approved by the city of origin itself.

My favorite stop was Bolhão Wine House in Mercado do Bolhão. This was not only because owners Patricia and Hugo have transformed their grandmother’s old flower shop into a cute wine bar, but also because the market itself is a must see for any visitor. It has a little bit of everything; from a hair dresser to a butcher to the freshest food, veg and fish you can find in the city. Even the local hotels and restaurants source from there. Luckily for us it was the perfect time of year for fresh, fat sardines so we tried a few samples of tinned sardines, olive oil from the Douro Valley, a traditional cheese pastry (queijadinha) and some muscat wine at the market’s wine house. We were also lucky to try some paio-de lombo, or smoked pork loin, from the neighboring butcher as well. What’s a shame is the market will be shut down while undergoing a 2-year renovation from March. André and the regulars fear the worst during this time for the local economy.

We moved on to what can only be described as a flavor explosion. At Flor dos Congregados we were served a double-decker sandwich, Sandes Terylene, warm crusty bread on the outside soaked with the gravy of juicy pork and sweet cured ham on the soft inside. Slow cooked, the famed sandwich takes 24-hours to prepare at this 164-year-old restaurant. Upon being served the sandwich, one of the 8-year-old twins who joined their parents on our tour cried out in excitement,“that looks crazy!” before devouring it.

Quite aching in the belly at that point, our next stop was for “an espresso in a teacup, well, because this place is fancy” at the historical Café Guarany, followed by sweet eclairs at Leitaria Da Quinta Do Paco. We finished off the tour, having moved on from strangers to friends over the last few hours, to share charcuterie and wine at the small wine bar Taberna Do Largo. Nidya and I stayed on well after the tour ended and shared a few more yellow bean lupins and wine from the small local producers. 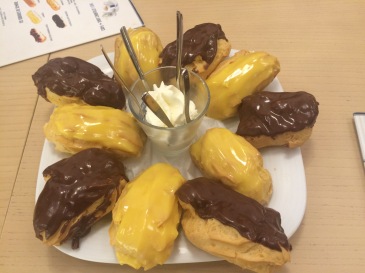 Lemon and chocolate eclairs at Leitaria Da Quinta Do Paco.

I couldn’t applaud André enough. His affable personality coupled with his passion for showcasing food made the entire tour a pleasure. In fact, I was even so surprised at how well he handled the small children on the tour as well, always making them feel welcome by offering them ‘grape juice’ while us adults had wine and he watched them closely on the busy streets.

What I like most about Taste Porto is their general regard for just having a good time with food. They’ll even run the tour with just 1 person, and never more than 10. Even better, we were given a sheet with full details of where we went and what we ate, followed by recommendations for some other great spots in town; and an email summarizing our day to follow it up.

When Taste Porto invited us to the Secret Garden Supper Club 5-course degustation the following weekend how could we refuse? Set in a townhouse in the art district, Rosa Et Al is also where Taste Porto host their equally well-regarded cooking classes. Just 4 other pairs joined us along with André, Taste Porto marketing guru Marisa, Italian coffee roaster turned bartender Geo, and the brother and sister owners and chefs Patricia and Emanuel.

Candles lit in the back garden, it was such a warming atmosphere getting to know the couples from Melbourne and the US as we casually made small talk over our first cocktail. Unfortunately before the first course was finished being served, the heavens opened up and the rain poured down. It made for a cozy evening sitting around the table inside, going from lobster tail to beef cheek and finally endless cheese and dessert. The best part was having Patricia and Emanuel join us at different points in the meal so we could learn more about their passion for food, Portuguese architecture and entrepreneurship. 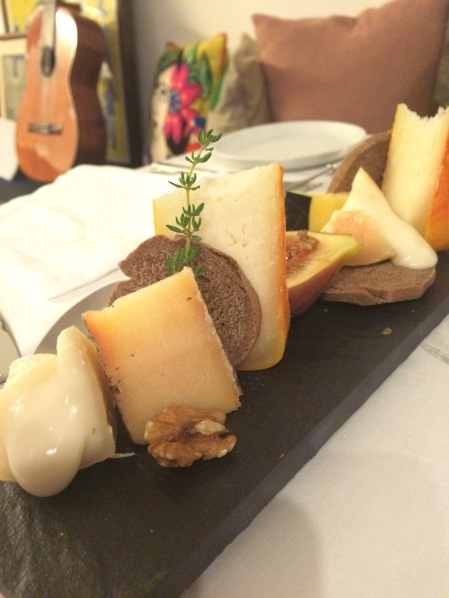 You’re probably wondering about the port though, but that’s a story for another day. When next in Porto and hungry, you know who to call…Taste Porto.