I intently stared out of the window, camera in position as we descended out of the cloudbank and into view of the vast snow tipped mountains called the Remarkables. This landscape is absolutely extraordinary.

The plane began to shake as we entered the windy valley between the incredibly close mountain ranges, then all of the sudden, oomph. My head smacked the side of the window and my tray table unfastened itself from the locked position. Panic. We must have dropped a few feet before leveling out again. “Don’t worry,” said the flight attendant over the intercom. “It’s just the wind between the mountains, nothing to be alarmed about.”

“Are you skiing?”  “Snowboarding then?” “So, what are you doing here?”  My reply was simple, I’m here to eat well and drink wine. 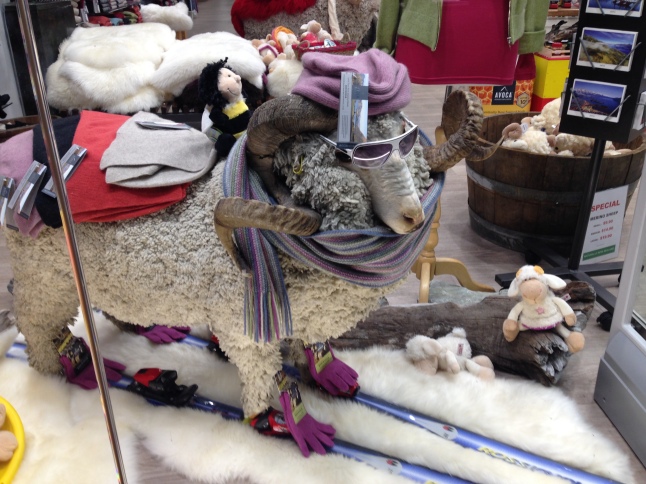 In a town where every other backpacker, boys weekend or family vacation seem to hit the slopes or jump off either one of the tallest or oldest bungy’s in the world, is it possible to enjoy yourself as a single traveler not in the slightest interested in the above? Sure is. I’d even rate Queenstown as not only my number one favorite destination in New Zealand but at the top of my books all around. So what’s there to get up to?

I hung with the locals at Atlas Beer Café, deemed Queenstown’s home of craft beer including microbrew Emerson’s (go with the English Porter on the hand pump) along with some guest taps and locally sourced food, like the lick smacking steak with demi-glace and Café de Paris butter, served with a side salad and fries.

The Find, previously known as The World Bar, was a great place to go solo. Maybe it’s just because Queenstown, unlike many Aussie bars, actually have bar stools at the bar. There’s nothing better than saddling up at the bar for a snack staring up at the teapots which house cocktails for the backpackers who trickle in later in the evening.

This is between all of the countless bars and nightclubs including Cowboy’s, Winnie’s and Searle Social Club amongst many other late night spots where you can find inebriated late teens and early twenty-something’s, and myself on one or two occasions, dancing the night away. 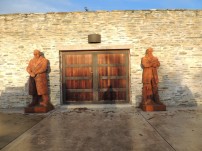 But then let’s not forget it was the wine I came for.

The Winery is a storefront that offers a taste of over 80 different New Zealand wines. Grouped by variety, the philosophy of this place is simple, yet expensive. Insert your “wine card” and choose from a taste, half glass, or full glass of some of the most desired wines in the region. At about an average of $5 a taste, I tried a few high-end Pinots then called it day.

This was after I went on my Queenstown Trail: Original Wine Tour just the day before. Lance, a 20 year wine-guide veteran led us to four different wineries in the Gibbston Valley, Central Otago. I’d rate them as such:

Best Tasting Host: Waitiri Creek – Jason, the vineyard manager of this family owned winery passionately and simply broke down the chemistry of wine making into terms us normal-folk could understand

Best Wine: Remarkable Wines – only winery where I enjoyed the whole range; walked away with the 2009 Pinot Noir

Best Notoriety: Amisfield – while I can’t afford their both delicate and elegant vintages, Will and Kate famously made a stop here on their recent visit

When in New Zealand it’s all about the lamb, oysters and prime cuts of beef.

I felt I was back in Melbourne while dining at Madame Woo, an eclectic modern Asian restaurant with delectable sticky pork belly dishes and thick curry’s set to tune of some of my favorite bands like the Kooks and Cold War Kids.

While Vudu Café is rated the number one brunch spot, you’d be lucky to score a seat. Instead, Bob’s Weigh Café was a smaller, simpler option serving great muesli and rumored the best coffee in town.

Skiing, snowboarding, snowshoeing aside, in town there are still a few options.

While the number one activity is to ride the Skyline Gondola up Bob’s Peak, I decided to take the bolder way up: my two feet. It took an hour from the base to zig zag through the forest up the mountain following the Tiki Trail. I’m not going to say it was easy, but nothing any reasonably fit person couldn’t handle with a few huff and puff’s in between Gatorade guzzling breaks. Even better, the trail was absolutely quiet. Only every so often I’d run into another hiker passing down on the trail. The best part was finally reaching the top and the breathtaking views over Lake Watakipu.

Once at the summit there are a few options from dining, bungying, zip-lining, more hiking or the luge. And while the luge came highly recommended from a charming traveler I met, after standing in line for an hour in freezing rain sandwiched between two families with small, irritating children, my ride down the ‘scenic track’ was more of an escape effort if anything. With the rain coming down too heavy to hike back down Bob’s Peak, I coughed up the steep fair of $19 for the Gondola ride back into town. 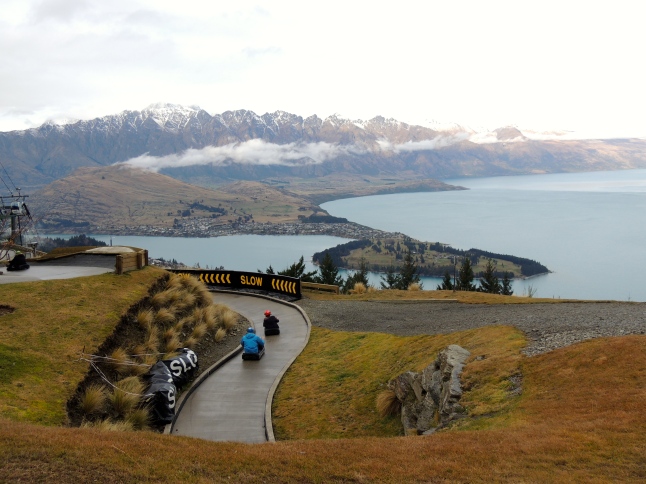 And none of my above experiences would have been so great if I was truly alone in it all. There were kind, approachable people that I met along the way. From an impromptu pub-crawl to discover the town with a friendly Norwegian, to the American and Aussie girls from my wine tour who invited me along to dinner and the handsome Irish boy who bought me chocolate/chocolate-chip ice cream. It was only on the last day as I sat in a café to escape the cold and rain before flying back to Australia that I had a sense of being alone, but luckily a book and one last English Porter did the trick.