When it comes to national festivities, nothing beats celebrating in the originating country. Think about eating a homemade Thanksgiving dinner in the US, participating in Carnival in Rio or Day of the Dead (Dia de Los Muertos) in Mexico. So when I was on deck to plan a surprise getaway in mid-March, the obvious choice was Ireland for St. Patricks Day. An ultimate bucket list tick for all.

To switch things up and keep the surprises coming, and in aligning with the destination theme, I wrote short rhymes (not quite official Limericks) containing clues which were revealed leading up to and throughout our whole weekend away.

I gave each of the girls a gold envelope with a clue inside when we met up for dinner about a month before the big trip. This would be all they’d have to spark some excitement before setting off for the weekend. They had no idea where they were heading…

This isn’t your average getaway, this much is true
Keep alert and be ready to solve all the clues

It’s March already and we all want some sun
But sometimes you need to sacrifice it, for a bit of traditional fun

There’s more to where this is going, you’re getting the gist
Take some time to prepare the ultimate Spotify playlist

There will be loads to learn and beauty to see
After all, for many, it’s a new country

You think you’ve figured it out but you’ll have to wait and see
It’s not exactly what your thinking, but it really is a goodie

This got the reaction I was hoping for. Cryptic clues… Spotify playlists, what could that have to do with it?  A country many hadn’t been to before with no sun!? And what exactly do you mean by ‘traditional’ fun? The fact that we were travelling over St. Patrick’s Day weekend didn’t quite click yet despite me assuming they would have guessed it.

But typically early in the week before we head away for our secret adventures, the group is given a snapshot of the weather and some indication of what to pack. Rhyming this too was the only option, obviously.

The trip is approaching, in fact, it’s very near
That’s why you’ll be expecting me to tell you what to wear

We will be outside, so I’d def pack your trainers
It’s not that fancy though so I’ll be dressed a bit plainer

Bring your carry-on wheelie as we’re flying Ryan Air
Don’t overstuff it as they’re strict, I wouldn’t even dare

9 am from Stansted, what was I thinking?
Let’s grab the 7:07 train from Tottenham Hale, I def won’t be drinking!

That’s it for now, there are lots more clues to come
Oh, and throw in some green, to join in on the fun

A last-minute request, the last clues were a trick
Chuck that bather in, you just might take a dip

I had been to Ireland before, Dublin a handful of times and Cork as well, so while planning this trip I did some research on some of the best Irish cities to celebrate St Patrick’s Day in. Dublin was an obvious choice, but it was a bit over our typical budget and I wanted to try something new. I had my heart set on Galway as I’ve heard so many lovely things and it was top of my list, but the challenge was that transport is limited so you need to rent a car – something the 3 of us typically had blacklisted from our trips as we rarely ever drive.

So, when we got to the gate at Stansted Airport earmarked for Shannon, Ireland I handed over 4 new gold envelopes with some fresh clues.

For this special weekend, I wouldn’t have it any other way
You guessed it right, we’re going to Ireland for St Patrick’s day!

But wait up girls, I need a volunteer
Drinking on the plane this early I wouldn’t even dare

So who will it be, who wants to drive
You’ll get the best views, and a big high five

Oooh, the excitement was building. What do you mean we’re not staying in Shannon? And we’re driving?! They never expected that. Both Penny and I haven’t properly driven for nearly 12 years, so keeping safety in mind, Sophie took one for the team and offered to drive under the condition that Penny navigates. Good news for me, because after the car was hired… 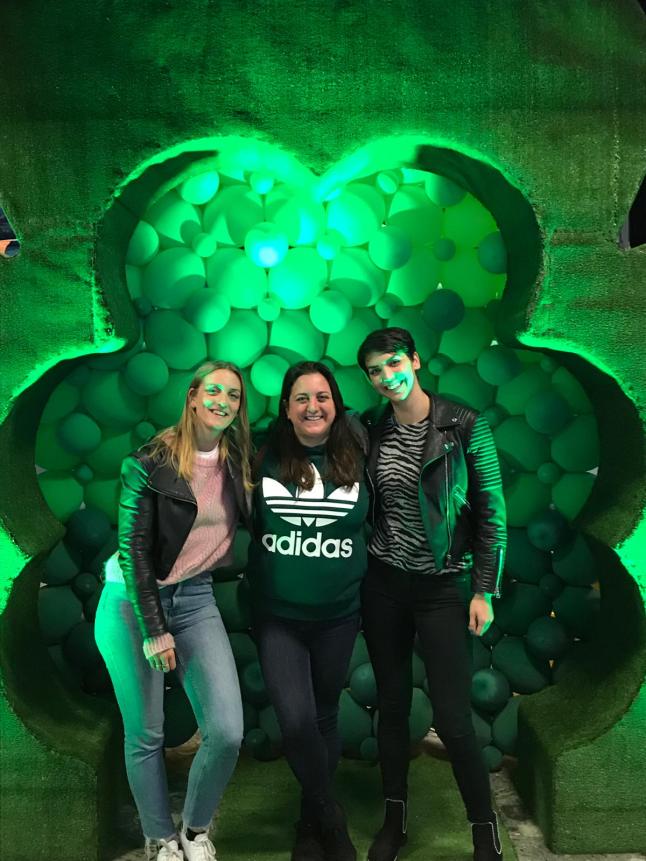 In fact, it’s your first time to Ireland and so there’s lots to explore
That’s why the first stop, of course, are the Cliffs of Moher

I was excited about this one. Sure it was raining, but they say in Ireland if you let the rain stop you from doing anything you’ll never get around to doing anything at all.

So there we were 3 girls setting off to enjoy the beauty of the famed 2,500km coastal road the Wild Atlantic Way. We didn’t do the whole thing, of course, that would take days but we thoroughly enjoyed our stretch of the Cliff Coast, from County Clare to County Galway. 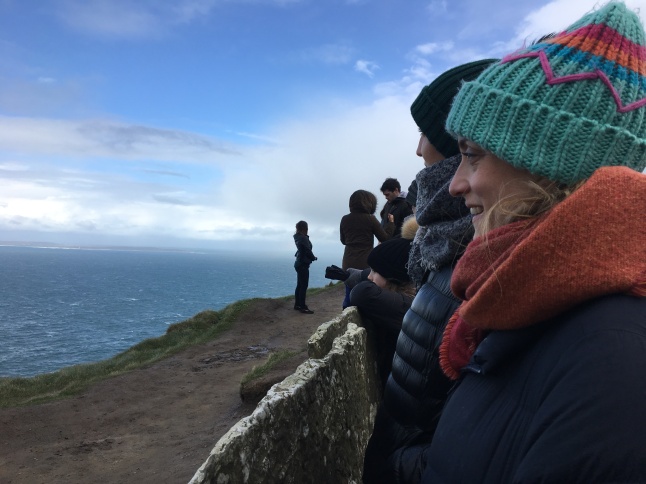 Enjoying the View – Cliffs of Moher

The Cliffs of Moher are one of Ireland’s most visited natural attractions. Stretching for 8km along the Atlantic Coast, you can see the Aran Islands and the beautiful cliffs from varying, yet treacherous vantage points. In fact, it was well worth the visit for some amazing snaps, but it’s somewhere that’s hot on the tourist trail so can be quite busy at times, and many people go off the protected path for the ultimate selfie. It’s also known to be a place where a lot of (deliberate and accidental) deaths take place.

After heading North from there we had a lovely drive through lush green country roads that hugged the coast, getting glimpses from time to time of the deep blue ocean. Houses would come sparsely, and cows and horses were our new friends. The landscape drastically changed as we moved away from the coast into the Burren, getting dizzy on Corkscrew Hill it was like a roller coaster – we didn’t know what was going to be around the next turn. We had our windows down and the music on, cautiously going through deep puddles flooded from the rain. Overall, it was the perfect road trip getting a feel for the Irish countryside and well worth taking the ‘long way’ to our final destination.

We can’t go much further till we eat some grub
A thatched roof and fresh oysters, it’s one of the best seaside pubs

Just off of the highway before entering Galway is Moran’s Oyster Cottage, one of the most famous oyster shacks in the world as rated by Travel & Leisure. With its picturesque thatched roof, it’s over 250 years old. After a full day of exploring, we were reading to dig into some local grub and have our first pint of Guinness of the trip. 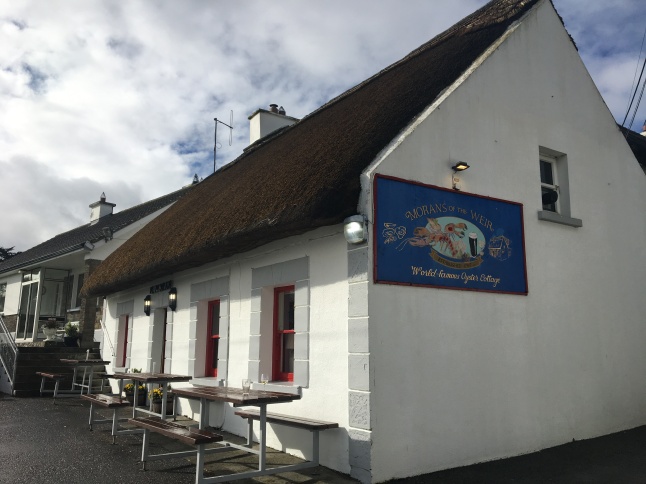 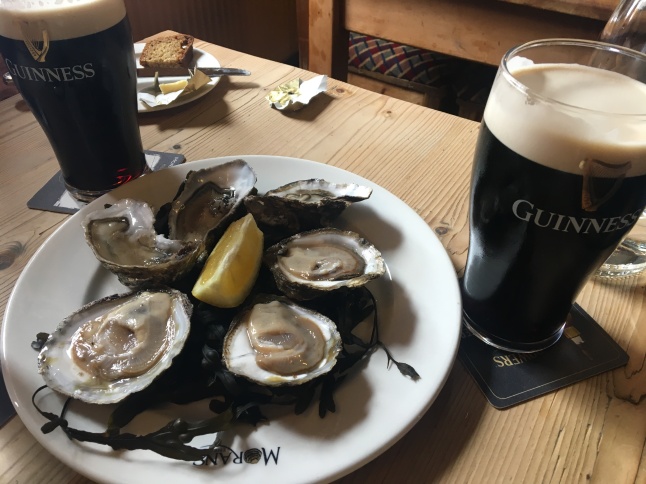 The first bite of traditional sweet brown soda bread was so good we gobbled it up in seconds, followed by the oyster platter consisting of both Giga (rock oysters) and wild oysters (known as ‘Galway Flat’). The seven-generation old recipe of homemade fresh chowder with generous chunks of seafood was a must eat but I could have gone without the warm garlic crab claws as the garlic butter took away the flavour of the crab. All the portions were massive, even Sophie’s vegetarian goat’s cheese salad and wild mushroom risotto. I couldn’t help but dip my fork in for a few extra bites, despite my bulging jeans, everything was so yum I’ll definitely be going back.

One more clue before we get on our way
If you haven’t guessed yet… we’re on our way to Galway!

There’s a reason why everyone loves Galway, it’s even pretty in the rain. This harbour city on Ireland’s west coast is known for friendly locals, winding lanes which still retain portions of the medieval city walls from back in the day and traditional pubs with live music. And we were ready to take it all in!

Best pubs in Galway (That we’ve been to…) 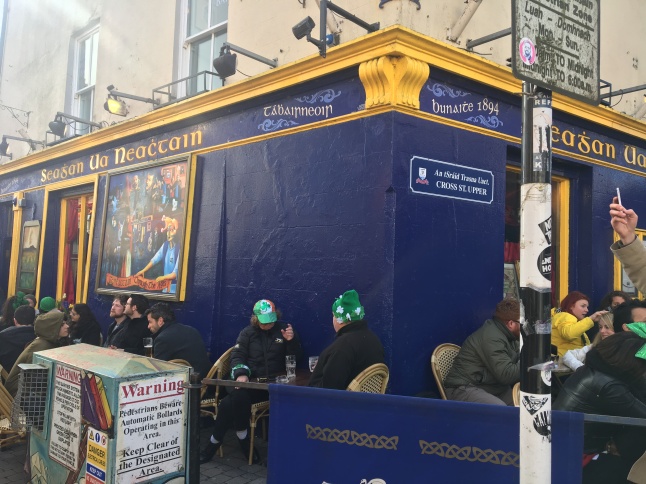 Rest up girls let’s call it a day
Here’s a little something to dress in your best, for the St Patrick’s Parade 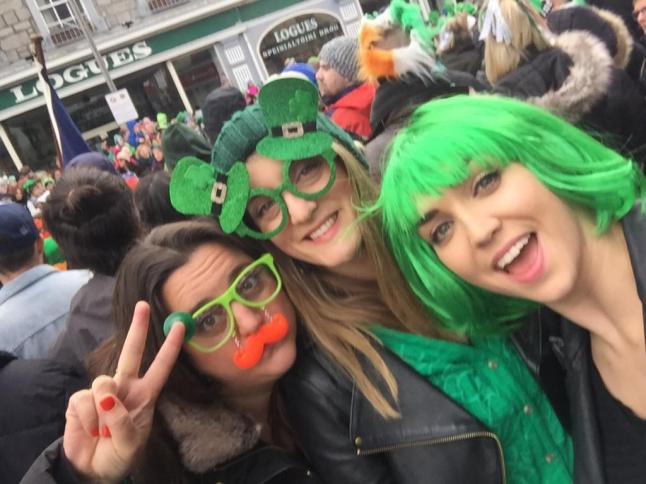 The parade itself was a nice local affair to watch, with various clubs, bands and organizations marching throughout the city to celebrate their own traditions. Families and tourists got involved, dressed in green wigs, hats, and glasses. But it was right back to the pub after to celebrate over Guinness and traditional Irish music that made the day so memorable. In fact, we met so many lovely, chatty people from all over Ireland who came specifically to Galway to celebrate. But even then the small city was was still manageable and it wasn’t overcrowded or too difficult to find a seat in a pub. Much different than I would expect from Temple Bar in Dublin.

We had our first pint at 12 pm, hit the pub, had a lovely Guinness stew at one of the best restaurants in Galway Quay Street Kitchen…and 12 hours later were in bed.

Hurry, get your stuff together it’s time to pack
I’ve booked a special treat to get rid of this hangover and to relax

Since it was Sophie’s birthday the coming week and I knew we’d be suffering a bit on our final day, I booked us into the spa at 5-star Hotel Meyrick. It was a great deal, two services for 60 Euro and we also got to use the spa, including the outdoor ‘Canadian hot tub’ which had views over Galway Bay. Maybe we can afford to stay here next time instead of the budget Imperial Hotel (big rooms and great location in Erie Square to be fair).

It was the perfect end to a great trip. After that, it was only a 1 hour straight shot back down to Shannon on the highway.

Fun Fact! Claddagh, an area close to Galway city, is where the famous Claddagh ring comes from. It is a traditional Irish ring which represents love, loyalty, and friendship.

Other recommended pubs in Galway