Did you know that Duane “The Rock” Johnson is Samoan? I didn’t but then again, I’ll never forget it, as the locals in Samoa are never too shy to remind you.

Samoa is magical. A far-far away place likely the most remote I’ve been to. Flights are infrequent and limited to Brisbane, Sydney, Auckland, Fiji or Hawaii. And that’s hard even if you live on that side of the world! But imagine the jetlag traveling there from Europe or the east coast of the US? Luckily for Steph and I it was only about 3.5 hours from Auckland.

I hadn’t witnessed anywhere as untouched and desolate anywhere before. Samoa is like a terrarium. It’s lush and green, simple and natural on one hand and then on the other you’ve got the mist of the sea, the turquoise landscape of the Pacific Ocean. 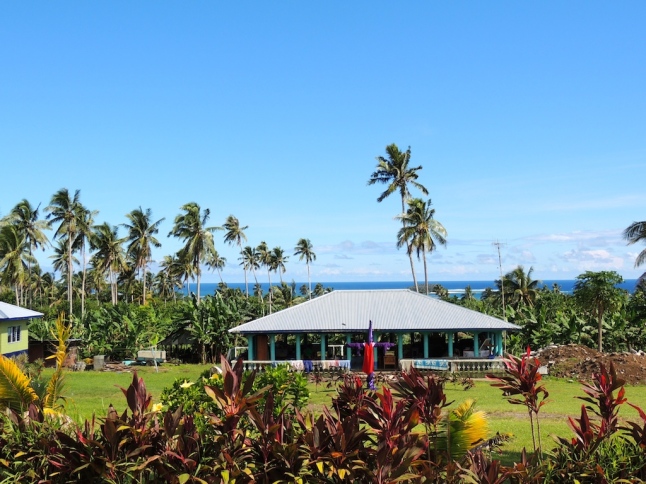 Each year traveling over Easter holidays to the South Pacific there is always a risk of cyclones or other natural disasters. Two out of the last five years I had to cancel trips to Fiji and Vanuatu last minute, but yet again, I took another gamble with booking a flight to Samoa this year. No regrets here.

“Talofa”, Captain Pati of Saletoga Sands greeted us at Apia International Airport with a huge smile and a fresh coconut for each of us. That was the beginning of my new found appreciation for fresh coconuts, and Samoans of course. As his wife sat silently in the passenger seat, chatty Pati educated us the entire hour to our remote resort on the far side of the island. We learned about Samoan customs, key phrases, and free things to do at the resort; but most importantly we learned about Duane “The Rock” Johnson.

Our beach front ‘fala’ was just what we pictured for our 3-day relaxation escape from reality. We were given a complimentary sandwich and a foot massage voucher on arrival, shown our private outside rainfall shower, and were grateful of a full menu that didn’t rely on meal times and a cheesy buffet.

Waking up to the ocean lapping outside our hut with a strong sea breeze in the air, we spent time gazing out to sea on our ocean front recliners, kayaking and stand up paddle boarding in the afternoons, then doing water aerobics which gave us an excuse to go to happy hour in the swim up bar and get messages in the spa.

As I lay with my book staring out at the overwhelmingly surreal landscape, towering palm trees provided shade from the blistering heat and staff with hibiscus in their ears kept the resort pristine, I finally felt truly relaxed and content.  This was just what I needed.

On the second day I received my one month valid Samoan drivers license. Sounds scary as I properly haven’t driven in too many years but I was confident in the fact that there were only about 3 roads on the entire island. This isn’t the type of island either where there are tourists everywhere driving around causing a havoc of holiday making, this is Samoa and literally the only people who are around are the locals, dogs and wild pigs roaming alongside the road.

I never thought I would said my best day would be anything other than lying in the sun, but our afternoon adventuring around the island was something I’d recommend to any visitor.

As we left the resort and skittishly laughed over the unkempt, bumpy road, we were in awe at how lush the landscape was. Now we properly were shown why there was a reason to go beyond our 4-star resort. Around each bend came a new small town. The locals walked alongside the road, played soccer in their front gardens, or sat in their open air, windowless houses going about their daily lives. We witnessed so much from a simple car window.

But we got out outside exploring too. We visited a Togitogiga Waterfall in O Le Pupu Pue National Park; we walked along the beach where true backpackers slept amongst the stars in basic falas; and I wished we did it, even just for one night.

As things caught our eye I’d simply pull over to snap a picture – of churches, colourful houses, the memorising ocean and neighbouring islands and even the chickens that slowly crossed the road. At one point two wild horses began galloping at our car, so I stopped, screamed, then laughed harder than I had in such a long time. Only in Samoa.

I have a confession though. There was one thing that brought me to Samoa and it was Tu Sua Trench. 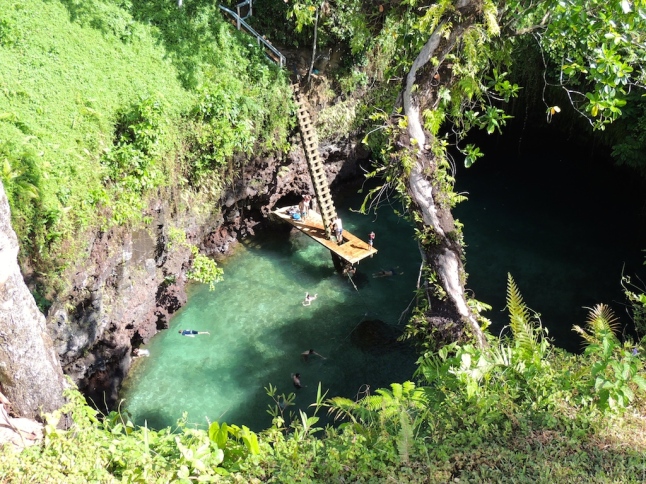 But at first it wasn’t what I expected. We turned down a not well marked gravel road to a simple car park with the ocean not too far off in the distance. We paid our 20 tala entry fee then were standing in the middle of manicured lawns, floral gardens and long steps down overlooking the rocky ocean cliffs. But then I saw it!

A massive whole in the ground of green. Tu Sua literally means giant swimming hole and is definitely the most unique natural wonder I’ve experienced. A collapsed volcanic lava hole, this is now Samoa’s most famous tourist attraction and rightfully so.

Steph and I were lucky though, it was the end of the day and there were only a few people left swimming in the hole. We missed the daily resort tours and school children. But first, we had to get down the 30 meter long ladder and that was scarier than I ever imaged it would be.

So there was Steph, floating in the waters below as I snapped a few pics and stood at the top of the ladder yelling down that I was unsure if I could do it. Of course I would though, this was my ultimate Samoan dream. I clung to each wrung of the ladder, holding on so tight, carefully stepping down to feel my own weight before letting go. This was a serious task and I’m surprised more people aren’t injured. Or maybe they are.

I finally got to the bottom and reached the dock, took one look down and all the sudden the gap between the water and dock seemed a lot deeper than it looked above. I was scared again. Eyes closed, nose held I jumped into the warm sea water to greet my friend.

We were lucky as a few minutes later the last group left and there we were, just Steph and I floating around in the middle of a volcanic crater the colour of jade. I couldn’t help but smile with glee – it was in the very thing I had shown my friends photos of in the weeks leading up to my trip, and it looked just like the pictures despite some being skeptical it actually would! Even more so as when we left we took one final picture from above, when it was quiet and still and all of the visitors were gone for the day.

On our last afternoon we moved on to Aggie Greys, a Sheraton resort less than 5 minutes from the airport. I was overwhelming surprised. This was by far the best view we’ve had our whole time in Samoa! The perks are limited to the view and proximity to the airport as there is the drawback of it’s nature being family friendly, large and over priced. In the end though it did the trick for a night but I’d recommend exploring the island further for longer stays.

One things for sure, Samoa is the place to go before it’s a “thing”. Everyone smiles and waves, it’s so peaceful and untouched and the remoteness speaks for itself, let’s hope it stays that way.

Today my best friend asked me to do a thing forever and I couldn’t be more excited to say YES!
Staycations in the UK keep getting better. Worthing didn’t disappoint - seaside vibes, bike rides, antiques and of course, delicious seafood for a short mini-break with the girls.
The ultimate girls getaway staycation in the UK took me to the lovely seaside town of Whistable to eat fresh oysters till my heart content. We cycled along the Crab & Winkle Way to Canterbury, before a long lunch at the infamous @the_pig_hotels. What a delight, from the vintage decor to their sustainable 25-mile menu. Hours upon hours later we were still sat fireside in the parlor with a glass in hand. Highly recommend!
Loading Comments...
%d bloggers like this: